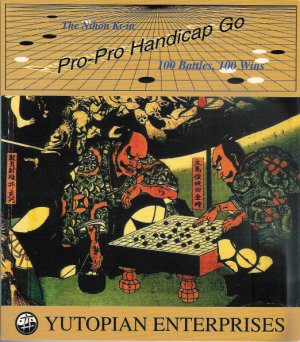 This is about handicap go, of course. It goes through a five-stone, a four-stone, and a three-stone game in quite a lot of detail (about 60 pages each), and then gives the first 50 or so moves of eight more games, with commentary.

I like this book quite a bit, especially the first game. Black in the first game plays nice solid moves, not trying to maximize the win but just trying to be reasonable and defend well, and it's very clear and well-done. They have little symbols, telling you which moves are good ones that you should remember, which ones are questionable, and which ones are good moves but are the sort of good moves that, if imitated by amateurs, could cause problems. Some people may find those symbols annoying, but I really liked them. I didn't like the second and third games quite as much, because in them black did a bit too much of playing as if it were an even game, but I suppose some of that is valuable so that you realize just how much of an advantage having all of those stones is; certainly the explanations were still cleared and detailed. And the last chapter, with the openings of games, was fine as well.

This is somewhat the same format as Kage's Secret Chronicles of Handicap Go, but I much prefer this one. The only thing that I don't like is that it was translated by the same guy who translated Dramatic Moments on the Go Board, and while he doesn't include as many Japanese words in brackets in this book as he did in that book, there's no reason to do that at all. But don't let that stop you from buying this. Anybody who has read the Elementary Go Series definitely knows enough to profit from this; it's much easier than most of the other Yutopian books.