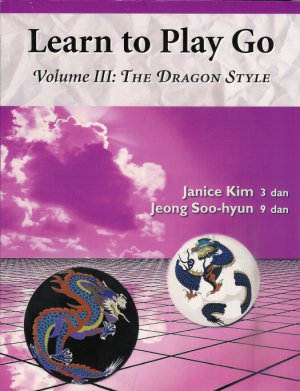 This is the third book in a series of introductory go books. Click here for general comments on the series.

The first part of this book is a high-level discussion of the game. It starts by presenting seven "opponents" that can harm your game, which are common mental errors that go players (not just beginners!) make. I think that including a section like that is a great idea; avoiding such pitfalls is a very important way to improve your game, and while we all figure them out eventually, it's very useful to have them written down. It then presents eight "secrets", go proverbs telling you how to think about the game. (The secrets aren't always that different from the opponents, other than the fact that the latter are positive whereas the former are negative.)

The second, longer part of the book goes through some actual games. It goes through a professional go game in a lot of detail, and then a nine-stone handicap game and a three-stone handicap game in a fair amount of detail. Again, this is something that I think that other introductory books are lacking in (and that the first two books in this series were lacking in), and it's good to see it here. The book ends with a discussion of handicap go, some sample openings, and some exercises.

This book is the most distinctive volume in the series so far; I'd recommend it to anybody reading elementary go books. This book concludes the "introductory" portion of the series, which is designed to bring readers up to about 10-12kyu.